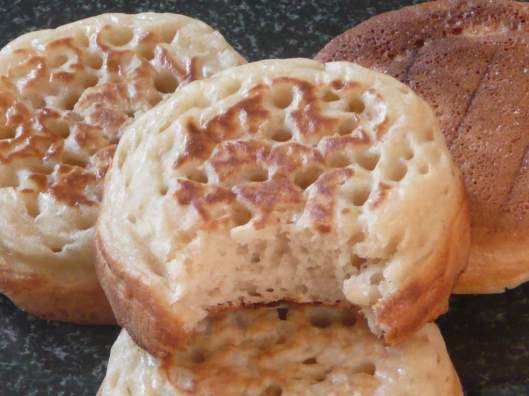 Soon after I had decided I was going to have a go at making crumpets I saw a pithy letter in the Guardian which read: “Having just taken three hours to make five crumpets, 79p for six from the supermarket is always going to win”. Well, I wasn’t put off… but there were times during my eventful baking when I could certainly sympathise with the writer of that letter. My first few crumpets stuck to both rings and griddle, and I burnt my fingers more than once on the rings. But I persevered, and by the end I felt I had got the hang of it. What’s more, these crumpets were like nothing you can buy: tall, golden and moist, and very tasty when soaked in butter and topped with jam.

This recipe is based on the one that came with my crumpet rings (from Mermaid Bakeware), with some tips taken from Daniel Stevens’ River Cottage Bread Handbook.

Repeat 10 times after me: “I will not pick up the crumpet rings with my bare fingers, I will not…” It’s so easy to do so without thinking, but if you do, you will regret it. They get very hot!

There are a couple of important things that a recipe cannot specify precisely. What follows might sound a bit complicated, but please don’t be put off.

First, the temperature of the griddle should be roughly low-medium, so the crumpets cook in 8-10 minutes. I used the lowest setting on my largest gas ring, and that seemed about right.

Then there’s the consistency of the batter. I don’t find the usual advice that it should be like single cream very helpful, especially once the batter is full of bubbles. So it pays to cook a trial crumpet so you can make adjustments if necessary.  If the batter runs out of the bottom of the rings, it’s too thin, so whisk in some more flour. If no bubbles rise to the surface, or they don’t burst, or even if you think that there could be more bubbles, then whisk in some more water.

And make sure to try some of the trial crumpet, to make sure it’s cooked inside. If not, adjust the temperature and/or cooking time.

In a large bowl, mix together the flour, yeast, sugar, bicarbonate of soda and salt.

Heat the water and milk together until lukewarm. Add them to the bowl and whisk to form a smooth batter.

Cover and leave in a warm place for about an hour. The mixture will rise to about double its size and be full of bubbles.

Beat the mixture a bit and leave it to rest for 5-10 minutes. Meanwhile, put a griddle or heavy frying pan on to heat.

Dip a piece of kitchen paper in sunflower oil and generously coat the inside and base of the crumpet rings. You want a good coating, not just a sheen of oil.
When the griddle is hot, oil it generously too.

Put the crumpet rings on the griddle and add three tablespoons of batter to each.

Cook for another two minutes so the inside is well cooked. You might want to take a look at the underside of the crumpets. If they are browning too quickly, turn the heat down a little, although crumpets can take being quite dark brown on the bottom.

Flip the crumpets over and cook the other side until they are just coloured. This won’t take very long at all.

Transfer to a cooling rack then regrease the rings and griddle and make the next batch.

I think these are best left for a few hours before toasting.

Daniel Stevens uses baking powder rather than bicarbonate of soda, and I am going to try that next time. He also whisks the baking powder and salt into the batter just before cooking.

© Euan Greig www.signorbiscotti.com 2011-2015
Please seek my permission before reproducing any images or recipes from this blog.