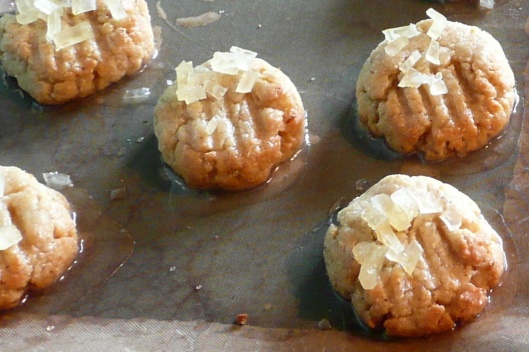 In a recent post, Little Loaf got rather excited about brown butter. Very excited, in fact. So excited that I thought “I will have what she’s having!”

As it happened, I was planning to make Lemon Drizzlers from Biscuit by Miranda Gore Browne, so I decide to use brown butter in those. It’s no reflection on Miranda’s book that I decided to adapt the very first recipe I made from it. It’s a lovely book, full of very tempting and sometimes quite unusual recipes, presented in a straightforward, gimmick-free way, with many useful tips on preparation and presentation.

Brown butter, or beure noisette, is made by heating butter until it turns a golden brown colour and the milk solids separate out. In the process it develops a deliciously nutty aroma and flavour. To make it, heat some butter in a small pan over a medium heat, keeping the pan moving all the time, until the butter separates and darkens in colour. Make sure not to overdo it, as it will not be very nice if it gets too brown. You’ll know by the smell if it’s ready.

For my biscuits, I put the pan in an inch or two of cold water as soon as the butter was ready. This was mainly so it would set, as I needed to cream it for the biscuits, but it also stopped it over-browning.

The smell from the resulting dough, with its mixture of nutty butter and lemon, was heavenly. It was vaguely familiar, but I couldn’t quite put my finger on quite what it reminded me of. Lemon fudge came to mind, although I’m sure I’ve never had such a thing. Sherbet lemons maybe?

The resulting biscuits were delicious. Moist inside, with the slightly crunchy crust and bottom soaked in intensely lemony syrup. As is often the case, they seemed to be better on the second day.

This is the first of what I intend to be a series of short posts about things I have made. This is not to suggest that I consider these things are in any way second best. It’s more that, as a novice blogger, I find it takes me a very long time to write a full length post, especially if I am including an adapted recipe. As a result I am falling further and further behind in describing my baking experiences. So I decided to allow myself to do some quick posts about things I had made. This will hardly ever mean that I think the subject wouldn’t deserve a longer write up. More likely, I will have made a recipe more or less as written, and it would not be fair to the author to quote the recipe verbatim. Or I may simply want to blurt out my enthusiasm about something I’ve made.

10 thoughts on “I Also Made… Lemon Drizzlers”

© Euan Greig www.signorbiscotti.com 2011-2015
Please seek my permission before reproducing any images or recipes from this blog.