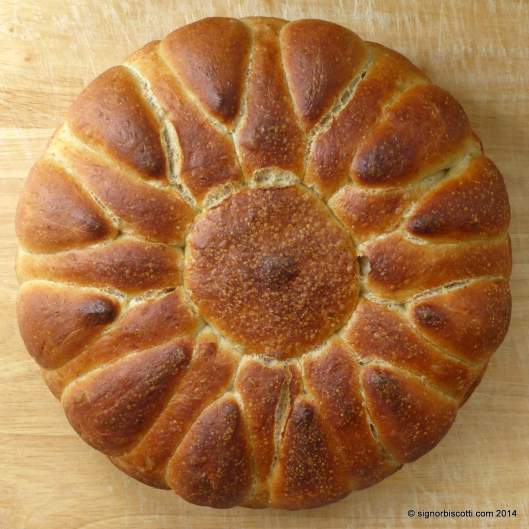 This loaf was inspired by the pattern on a pair of ancient Persian silver bowls, dating from about 500BC, which I saw on a recent visit to the British Museum. I haven’t been able to find a picture of them on line, so you will have to make do with my rather fuzzy picture, shown below, which does still convey the simple elegance of the design that so appealed to me. I’m sure the execution of the bowl was anything but simple, not least because the surface of each is divided into fourteen segments. I went for the much simpler option of having only twelve in my loaf.

Despite its appearance there is no complicated shaping, scoring or plaiting involved in making this loaf (and talking of plaiting it is far easier to achieve a pleasingly regular result with this loaf than when doing something like the dreaded eight-stranded plait). All you need to do is cut the dough into pieces, do some simple shaping on them, then assemble them in a regular pattern. All of which is described below.

As with the recipe for Cottage Loaf, the dough for this loaf needs to be rather stiff if it is to retain its design after rising and baking. So don’t be tempted to add extra water unless you really can’t get all the flour to mix in (flours differ in absorbency, so this could happen).

About 12-14 hours before you plan to make the final dough, mix together the poolish ingredients in a large bowl. Cover with plastic and leave in a warm place. It should end up quite bubbly.

To make the final dough combine the poolish with all the other ingredients until thoroughly mixed. A cutting and turning action with a bread scraper is good for this. This is a stiff dough and it may take a while to get all the flour incorporated, but persevere and only add extra water if you really can’t get all the flour to mix in. Even then, only use as much as is necessary to bring everything together.

Knead for 5 minutes or so, until smooth and elastic (or you could use the gentle rest and fold technique I described in my Cottage Loaf recipe).

Cover the bowl and leave in a warm place for 1-2 hours until the dough has doubled in size.

Grease the cake tin, preferably with butter, and line the base with baking parchment. Grease the sides of the ramekin and place it in the middle of the tin.

Scrape the dough out onto a lightly floured surface. Pat it out gently into a rectangle then roll it up like a swiss roll.

Shape each piece into a tight ball and lay them back in the same order.

Now take the 60g balls (the medium sized ones) in the same order and roll them into a pudgy sausage shape. Place them in the tin so that they radiate from the ramekin like the petals of a flower. Start with the four compass points then fill in between.

Once all the “petals” are in place, dip two fingers in flour and lightly press down and outwards on the outer edge of each one so as to spread it out slightly.

Take the 15g balls and roll on one side to form an elongated tear drop shape. Place them on the join between the “petals”, slightly in from the outer edge of the tin.

Remove the ramekin and put the largest ball in its place. Brush all over with beaten egg, trying to avoid any running down the side of the tin.

Cover and leave to rise for 45 minutes or so until doubled in size.

Preheat the oven to 220C. Bake the loaf for 10 minutes, then turn the heat down to 200C and give it another 20-30 minutes. If possible, get some steam into the oven at the beginning of the bake, by throwing a small cup of water into a preheated roasting tray and/or spraying water into the oven.

Towards the end of the baking time there would be no harm in releasing the loaf from the tin and putting in back in the oven until it passes the “hollow sounding bottom” test.

Variations on a Theme

There a number of variations you could try when it comes to forming and baking the loaf.

For my second loaf I put the ring part of the cake tin directly onto the parchment lined base of my baking dome and removed it just before the loaf went in the oven. The result was a flatter loaf where the details were more rounded. If you don’t have a baking dome, you could put the ring on a lined baking sheet. I would expect the loaf to spread more than mine did and end up with a more scalloped edge.

Of course, you could simply make the loaf free-form on a lined baking sheet. It would probably end up less regularly patterned, but I am sure it would still be interesting.

Have fun experimenting. I intend to!

© Euan Greig www.signorbiscotti.com 2011-2013
Please seek my permission before reproducing any images or recipes from this blog.