Semolina is very confusing, as the same word is used to refer to a number of quite different things. In the UK it generally refers to a yellow, slightly grainy flour made from durum wheat, which is primarily used for making a simple but tasty milk pudding. It is not usually considered to be suitable for making bread, except when added as a small proportion of the total flour. But as you will see below, I have found that you can make beautiful bread using as much as 75% pudding semolina. It makes a lovely bread, with a primrose yellow crumb, a crunchy crust and a distinctive flavour.

And the confusion? Well first of all, even in the UK I have seen the name semolina applied to products made from other grains, usually normal wheat or rice. I have even seen a semolina that was effectively ground up bran (and it was every bit as horrid as it sounds). However, if your semolina is yellow, it is almost certainly the right thing.

But the muddle doesn’t stop there. The famous “semolina” breads of Italy, from Puglia and Sicily for example, are not in fact made with semolina (or semolino, as they call it), but with a more finely ground flour called semola di grano duro rimacinata. The key word here is rimacinata, which means re-milled, and it’s the re-milling of the semol(in)a that produces the finer texture. This flour is hard to find in the UK, especially where I live in rural Gloucestershire, but if you do see those magic words on a packet, snap it up. It is lovely stuff. You can use it on its own to make bread, and it is also great for pasta and pastry. Just in case you are lucky enough to have some, I have given a version of the bread using it below.

To add still further to the confusion, I believe that in the US you can buy “semolina flour”, which is in fact what we here call semolina. And there is also something called durum flour, which should be similar to semola rimacinata. However the “durum flour” I found for sale in the UK turned out to be (pudding) semolina.

To cut through all this mess, if you can find yellow pudding semolina or Italian flour labelled semola di grano duro rimacinata, you should be able to make one of the two recipes below. That “should” is because the pudding semolina version may be a bit of a gamble as I can’t guarantee your particular brand of semolina will work. I have successfully used both the Waitrose and Whitworth brands. But I’d urge you to give it a go, for what do you have to lose? A few pence and some of your time. What you will almost certainly gain is a beautiful bread with an exceptional flavour.

As you can see below, the loaves made with the two different flours turned out very much the same. The pudding semolina one was a little bit paler in colour and had a slightly rubbery texture. As it happens, my blind tasting panel (OK, my husband) thought it had the better flavour. But they were both delicious. 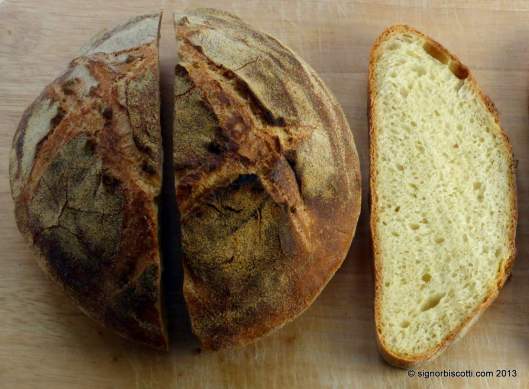 Bread made with pudding semolina

For ingredients marked with a star* see notes above

In a small bowl, mix together the biga ingredients, cover and leave at room temperature overnight or for up to 24 hours.

Combine the dry ingredients for the dough in a large bowl, then add the biga and water. Mix until all the flour has been incorporated.

Turn out onto an unfloured work surface and work it for 5-10 minutes, until smooth and elastic. The dough will feel strange and grainy to start with but it will soon develop into something much more familiar.

Put back in the bowl, cover and leave until at least doubled in size. This could take 3, 4 or even more hours.

Turn the dough out onto a lightly floured surface, pat out into a flat disc, then fold and reform into a ball. Dust the surface with flour, cover with the bowl and leave to rest for 10-15 minutes.

Turn the ball flour side down and repeat the flattening, folding and shaping into a ball. Dust a 1kg proving basket with semolina and do the same to the top of the ball of dough. Put it upside down in the basket, cover and leave to rise until doubled in size. This rise is likely to be faster than the first.

Preheat the oven to its maximum temperature (250C fan in my case).

There a number of ways you could bake this loaf.

I used my 5 litre cast iron casserole, which I preheated along with the oven. When it was time to bake, I dusted the surface of the loaf with semolina, and then carefully tipped it into the bottom of the casserole. It doesn’t matter if it doesn’t go in quite straight, as it always seems to sort itself out in the oven.

I then scored it, taking even greater care not to burn myself on the side of the casserole (my fingered oven gloves came in handy here). Then I replaced the lid, put the casserole in the oven and reduced the temperature to 230C (fan). After 20 minutes I removed the lid, at which point the loaf was well risen but still soft and pale in colour. I gave it another 20-25 minutes, until it was well coloured and sounded hollow when tapped on the bottom.

You could of course prove and bake the loaf in a tin. A good sized 2lb / 900g one would be about right (so called 2lb tins do come in wildly different sizes). I have also successfully used a 20cm round cake tin. Or you could simply turn the loaf out onto a baking tray. If not using a casserole, it would be a good idea to preheat a roasting tin in the bottom of the oven and throw some water into it when you put the loaf in.

I am submitting this post to Panissimo, a bimonthly collection of breads from around the world, run by Barbara from Pane e Companatico (Bread and What-goes-with-it) and Sandra from Indovina chi viene a cena? (Guess who’s coming to dinner). This month it is hosted by Simona from Briciole, and the theme is Special and Ancient Flours. I hope that Pudding Semolina qualifies!

© Euan Greig www.signorbiscotti.com 2011-2013
Please seek my permission before reproducing any images or recipes from this blog.